At last the easing of COVID restriction was going to allow us to get out and about for a few day, with some sort of normality.  The downside was trying to get digs over a weekend without having to sacrifice a kidney or your first born.  After a rummaging around for ages we found a room at a Premier Inn in Inverness with a Beefeater and pub next door, we booked up while it was still available.  My wallet and I both wish the wife would embrace camping!
Running late as usual, we decided to head up the A9 to save some time, then come off at Dalwhinnie and pop into the Snack Shack for some excellent cake and coffee.  The bank holiday weekend traffic and roadworks around Perth put paid to that plan... the cake at the Snack Shack was still tasty.
Stuffed with cake we headed towards the A86 for Spean Bridge to get off the A9.  As the road climbs out of Dalwhinnie the high point of the road provides wide panoramas of the mountains around Melgrave and the spectacular Creag Meagaidh.  The road is fast and open allowing rapid progress over the superb road surface. The views of the sandy beaches at the east end of Loch Laggan just seem so out of place in this highland scene.  We stopped at Laggan dam to get off the bike and take in the views back along the river Spean to Loch Laggan.
After getting to Spean Bridge the traffic was horrendous all the way along the side of Loch Lochy and Loch Ness.  We decided not to stop and just get to Inverness as quickly as we could.  It was always going to be a busy Saturday.  After such a long hot day is was with much delight we found we could get a table for a drink before dinner!
After recovering from a full cooked breakfast we were heading for a couple of waterfalls.  After we had visited Rogie falls when we were last up this way, we now have to track down waterfalls whenever we are away.  First stop was Black Water falls just north of Garve and then the Wailing Widows falls on Loch na Gainmhich.
As we were staying on the west side of Inverness we headed along the shores Beauly Firth past Bunchrew before picking up the absolutely marvellous A835 all the way to Ullapool.  The road breaks you in gently sweeping leisurely along the side of Loch Garve, setting you up for the gloriously fast and sweeping tarmac all the way to Ullapool.  Before the really good riding starts though, we had arrived at the Black Water falls.

After a good look around the falls we had a good chat with Johnny Blade and his wife, touring on his well travelled Blackbird, before we headed for Ullapool.  This piece of road is one of my favourites in Scotland, it is so fast and flowing it just makes riding a pleasure.  The corners have great forward visibility and most of the road has been recently resurfaced with none of that pesky surface dressing.  Even two up the big RT excels on these fast sweeping roads.  The scenery is a bit of a distraction, so be aware, as you will probably be travelling a bit faster than you think!

The road based bliss continued all the way to Ullappol where we stopped for a quick refreshment.
Continuing north on the A835 the road narrows down a little but the riding is still fast and enjoyable.  Given the traffic of the run up to Inverness I though the roads would be teaming, but there was next to no traffic and the quality of the road makes it easy to pass the few camper vans we came across.  As the scenery grows bleaker the views become more dramatic as the mountain raise up over small lochans on either side of the road.  Turning left onto the A837 the road heads for Loch Assynt.  This is where all the traffic is at.  We could not get stopped anywhere, cars and campers were abandoned everywhere, so we just continued on to the Wailing Widows falls.
Just before the falls we were snapped by a photographer from Biker Pics.
The walk to the falls beat us.  The last time I had been here there was a path to the base of the falls.  The weather over the past few years has taken its toll on the gorge though with many landslides and rock falls making the path hard going.  It would have been fine in walking boots or even trainers, but scrambling over the fallen rocks and trying to walk along the washed away path in bike boots was not going to end well.  We turned around and walked back to the bike.  Even the wife was struggling and it wasn't just my broken body that was holding us back.
At least the scenery from the parking was stunning.
After the disappointed of not making the falls, we sat around for a wee while enjoying the stunning scenery and clear blue skies.  We decided to head back the same route we had come as Audrey was keen the see the road from the other direction.  We had headed north together on this road a few times, but never south.
Arriving knackered and sweaty back in Inverness, it was back to the Beefeater for a few cool beers and a meal.  After getting cleaned up first, of course.
In the morning I was once again tempted by a cooked breakfast, and once again regretting it as soon as I finished it!  Over coffee we decided to have a ride around the Wester Ross coastal road.
Like yesterday, we again started by warming up heading west towards Garve on the A835.  Just after Garve we turned off onto the A832 and the tree lined road climbed gently for mile after mile.  This is another one of those fast and winding highland roads that is just made for bikes.  The surface is brilliant and the long fast curves hold no surprises.  As always the biggest distraction is the scenery.  The roundabout at Achnasheen is the only anomaly on this fantastic road on the way to Charlestown.
The road continues is relentless charge west along the side of Loch Maree with Slioch rising high into the sky on the far shore.  Then suddenly the road changed character completely, the fast and flowing double track suddenly turned to single track as we approached Loch Bad an Sgalaig.  The road then twists, turns and drops down following the course of the river Lub na Coille, then just a suddenly the twisting single track turned back to fast double track as we approached Charlestown.
After a quick stop in Charlestown we continued on the A832, in a few miles the road turns north after passing through Gairloch.  From her until Poolewe the scenery is classic highlands with rugged, bleak peaks rising high into the sky behind shallow lochans in scruuby moorland.  After passing through Poolewe the sea and Loch Ewe is now a constant companion on your left as the road continues north.

It was now full on tourist mode drinking in the views and enjoying the cool sea air as we continued following the coast to the white sand beach at Gruinard bay. 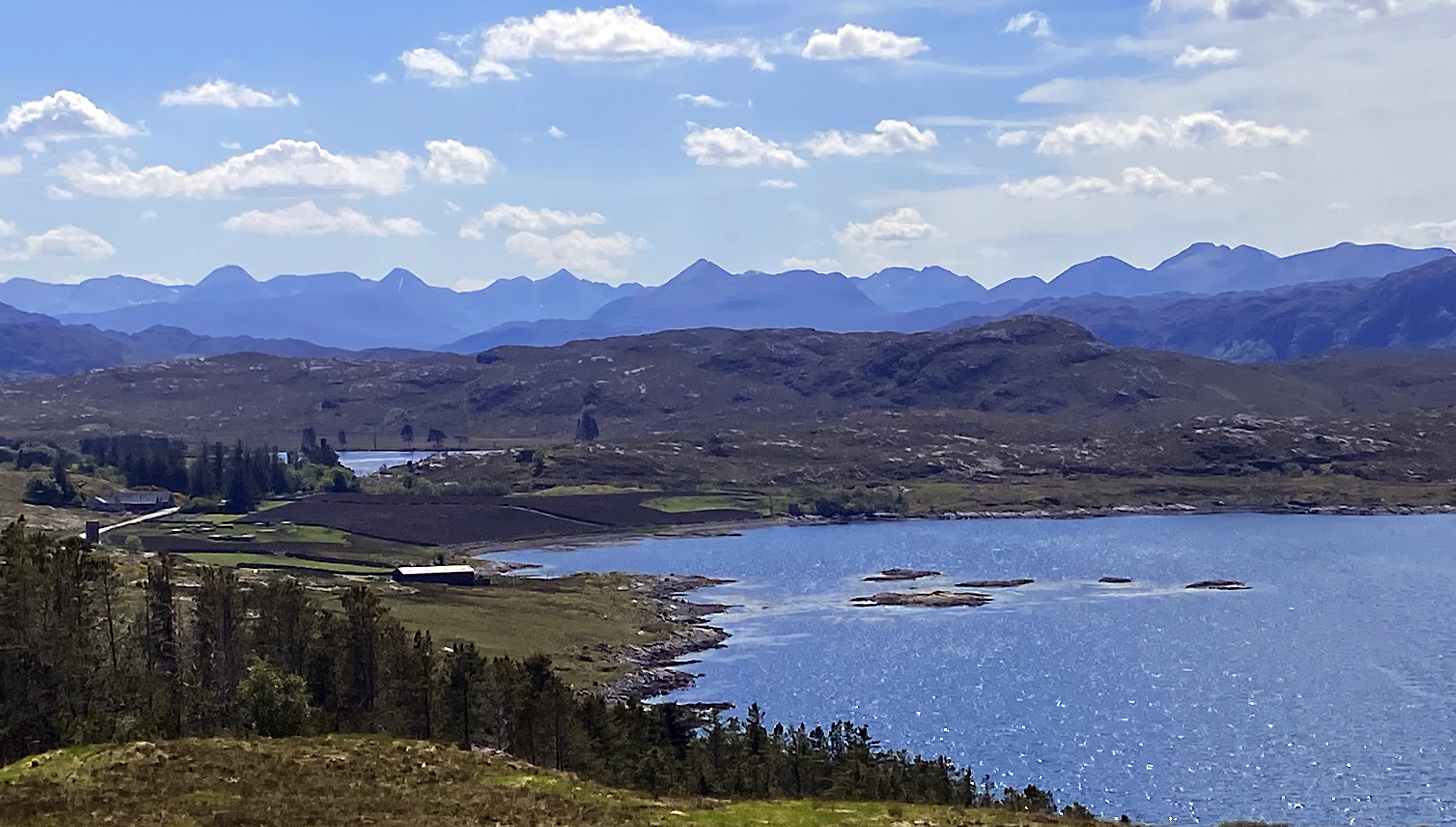 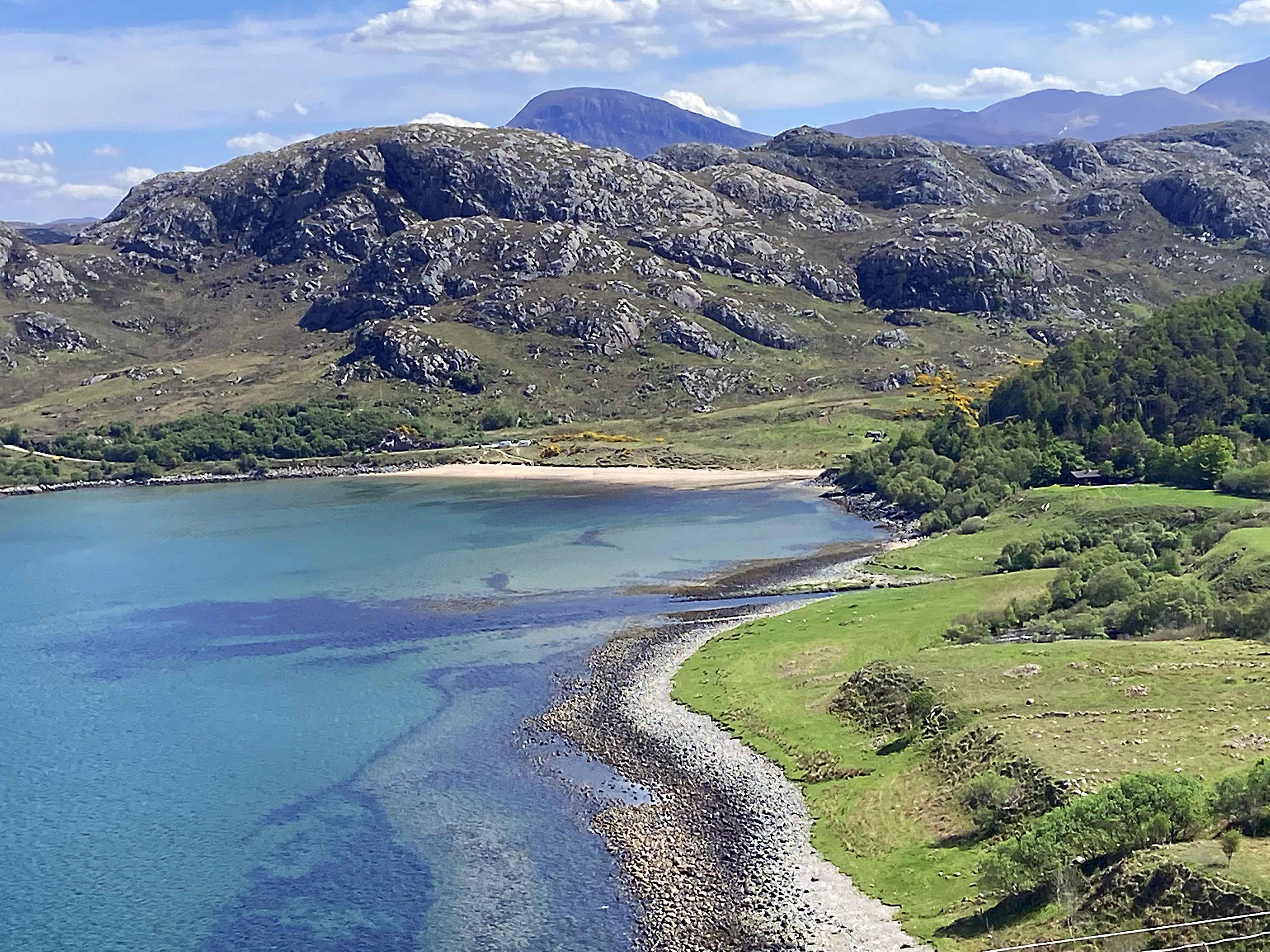 After spending a glorious half hour at the beach we jumped back on the bike and continued round the Wester Ross loop.  As the road swings right and heads east the road hugs the shore of Little Loch Broom with the mountains still rising to the north.  At the end of the loch there is a fast run downhill to Dundonnell where the coast and mountain views give way to a tree lined road that follows the Dundonnell River.  As we neared the right turn for Inverness and back onto the A835 the scenery once again opens up as we climbed away from the river and the lush tree lined road once again becomes an open and bleak moor.  Still stunning under the blue skies though!
Even though we rode back to Inverness on this road yesterday, it is still a pleasure to ride this fast, twisting and flowing strip of tarmac in these condition.  We had a quick leg stretch at Loch Glascarnoch again, before the final run back to Inverness.
It was the intention to walk down into the town tonight, but it had been a long hot day so we just decided to once again enjoy the beer, wine and food local to the Premier Inn and very nice it was indeed.
On the way home we decided to avoid the A9 and head south down through the Lecht and Braemar.  I don't know if it is just me or when coming home from a trip does everyone else just want to be home, or is it because I use this fantastic road so much I take it for granted?  Anyway, there aren't any pictures as we just rode home.  I guess the though of work the next day and ending such a  fabulous few days had us both down, even Audrey wasn't snapping away at every opportunity.
I must write up the A93 Glenshee, Braemar and Lecht roads as a ride guide.
That was a great way to finally break lockdown for us.  Yes, I had been away on my own but it was so good to get out and about with the wife again.  Especially when the trip was as good as this!