The car sliding to a stop at the traffic lights half a mile from home justified the decision to leave the bike at home and take the car on our December getaway.  The sky was blue and the sun was shining, but even at midday the temperatures were still on the wrong side of zero.  Our digs for this years pre silly season get away was the Moorings Hotel at Banavie overlooking Neptune's Staircase on the Caledonian canal, just north of Fort William.
The skies remained clear and bright as we drove north through Callander and along the side of Loch Lubnaig.  Surprisingly there was next to no snow on the hills surrounding the loch, and the hills remained snow free even at the summit of Glen Ogle before we swept back down towards Lix Toll.  Pulling into The Green Welly Stop we warmed ourselves up in front of the log fire before grabbing an excellent, if expensive, roast beef roll and a coffee.  After a quick look around the shops for some Christmas knick-knacks we were on the road again.  Climbing up to Rannoch Moor we stopped at the Loch Tulla viewpoint.  As expected the views back over the Loch towards the Black Mount were stunning, but the sun was now so low in the sky and directly in front of us that decent photography was impossible.  We drove further up the road to Rannoch Moor to Lochan na h-Achlaise in hope of better light.

Glen Coe was absolutely heaving with walkers and sightseers making the most of the stunning weather and the next place we could get stopped safely was the Meeting of the Three Waters.  The frost was still hard on the ground here, but the waterfall was all but dried up.

As the road crossed Loch Leven at Ballachulish, I had the feeling we were cheating on our usual December digs at the Hollytree Hotel at Kentallen and wondered if we were doing the right thing going somewhere else.

The Moorings turned out to be a good choice, the new rooms were warm and comfy with amazing views over the canal, the food in the bistro was good and the bar had a good selection of drinks.  The only downside was there is not much of a view from the bar area.  We solved this the next night by getting some drinks in and sitting looking over the locks towards Ben Nevis the following night.  It was freezing outside so we had a huge drinks cooler just outside the door!
After a comfy nights sleep and a good cooked breakfast we decided to drive down to Morar and have a look at the beach.  The drive down the road was amazing.  Not only was it a great drive, but the freezing fog the previous night had left the shaded areas a beautiful crisp white and the open areas bathed in atmospheric winter light.

As it was still -3 it was not surprising that we got Morar beach to ourselves!


After wandering around the beach for a wee while we headed back to Fort William to get the aforementioned drinks then putting them on the balcony to cool for later.  A light lunch in the hotel was followed by a walk along Caledonian canal before it got too dark.  The frosty banks and mirror flat waters looked so peaceful as the sun dropped lower in the sky and the shadows grew longer.

A steak dinner and a few drinks overlooking the canal and the lights of Fort William in the distance rounded out a great weekend.

I don't know what the rest of the rooms in the Moorings Hotel would be like, some of the older parts of the hotel look a wee bit tired, but the new rooms and bistro are well up to par with any other modern hotel.  I would come back here again, but I think I would always book a superior room.
at December 13, 2019 2 comments:

I have lost count the number of times I have driven up the A9 to Inverness and beyond.  Inevitably the destination was Thurso and the ferry to Orkney, to feed my 25-year obsession with wreck diving.  The drive regularly left me in awe at the beauty of the landscape, especially when you got north of Pitlochry.  However as I was always the designated driver I never really got to take in the rugged landscape that makes the A9 the most scenic, but boring road in Scotland.
A plan started to develop in my mind when the wife announced there was to be a girly weekend in the Lakes in the middle of November.  Train times looked good and a hotel was available.  Audrey confirmed the weekend she would be away and I had everything booked within the hour!
To miss the rush hour I had booked a train after 10 o’clock from Edinburgh, this gave me time for a relaxed but awful Breakfast King meal from Burger King.  Why do I keep doing this to myself!
As we pulled out of Edinburgh and I settled into my First Class seat, it was only £11 more than the basic price so why not, I was looking forward to another first.  I was going to cross the Forth Bridge for the first time in 35 years of travelling.  Even the drab grey of a misty Scottish November day viewed through a filthy train window couldn’t diminish the majesty of the graceful old lady.  The filthy windows would haunt all the pictures I took on this trip. 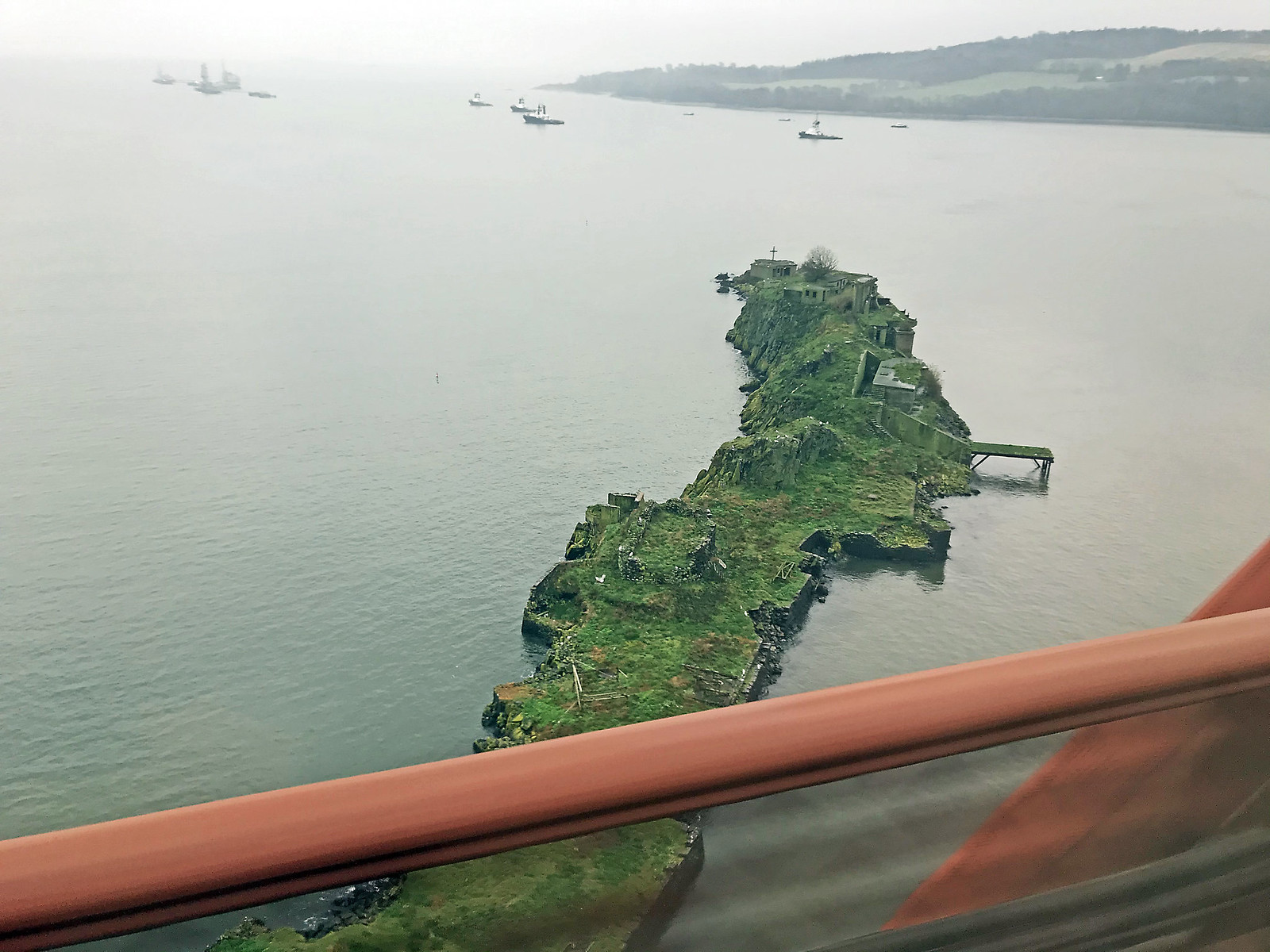 Just like driving up in the car there is little to excite until you get in to the highlands for real as you leave Pitlochry.  The low sweeping tree lined hillsides of the lowlands begin to give way to rugged snow capped mountains rising to the left and right of the train.  Ice covered streams sweep back and forth around the rails feeding small and equally frozen Lochans formed in the peaty soil.  As the train neared Dalwhinnie even the surface of Loch Ericht was covered with a swirly sheen of ice as it stretched off into the distance down the glen, framed by snow capped mountains.
North of Aviemore after cresting Slochd summit, the scenery begins to soften again as we coast down towards the Moray Firth to arrive in Inverness. 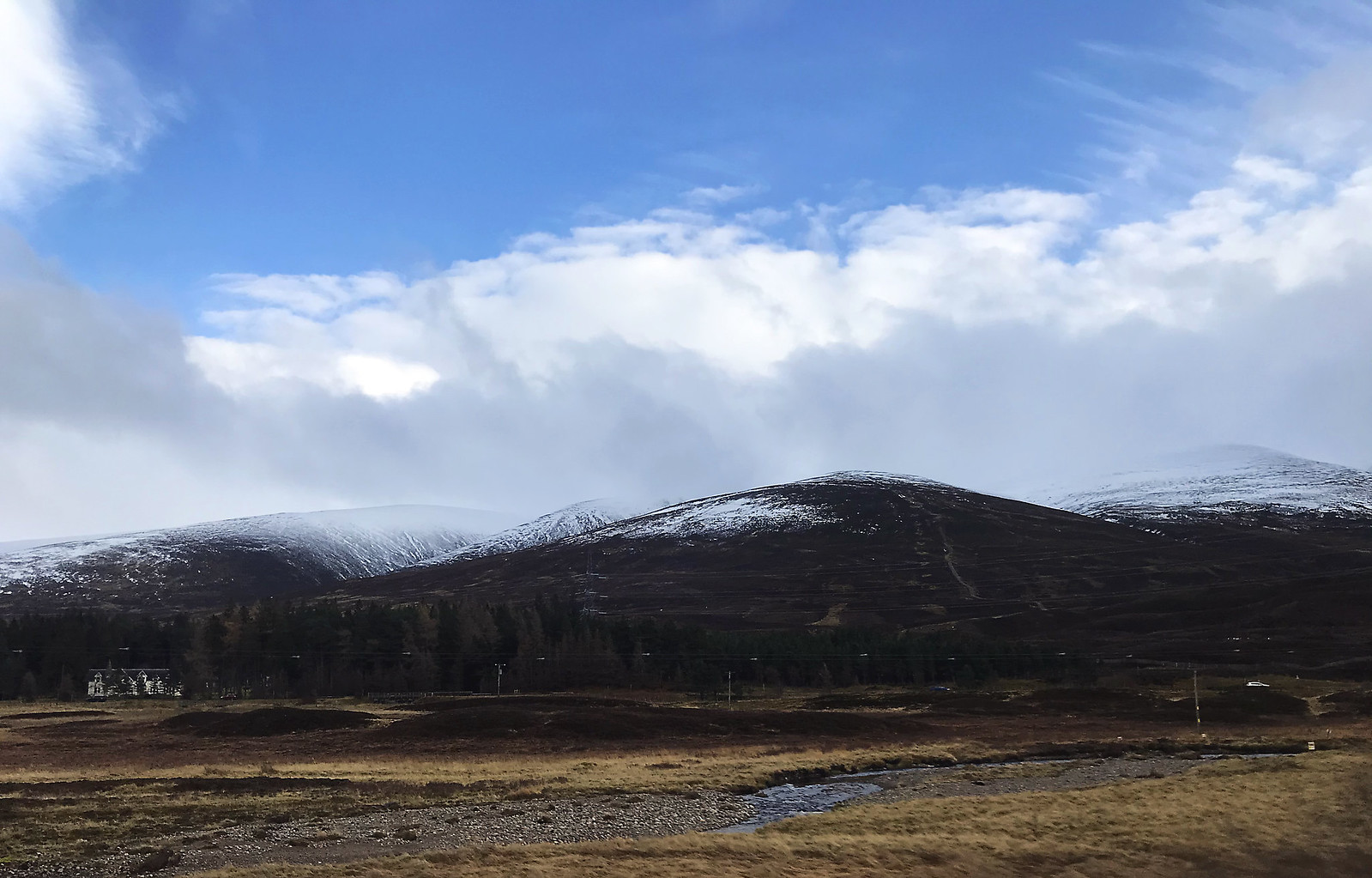 The digs for this wee trip was The Royal Highland Hotel, right at the railway station.  There the good news ends, I should have known better for £136 for two nights.  On arrival they were trying to get the smell of a backed up toilet out of the reception.  OK, I’ll go with that.  Up to the room… this place badly needs done up and please what is with shower curtains in 2019!  At least the bed was comfy and the room warm.  The local bottle bank was directly outside the single glazed sash window and it was well frequented until about 1am.  Shattered as I was, I less than impressed with the 3 false fire alarms the next morning.  I ignored the third alarm and stayed in the bath.  Just as well the full cooked breakfast was good.  Fawlty Towers anyone?

Anyway on with the day, I wandered the 50 meters to platform 4 and jumped on the 10:41 for Thurso and settled down.  The only cloud on the horizon, apart from the ones outside threatening rain, was the four already pissed up Glaswgians intent on drinking the Highlands supply of cooking lager and doing so with it turned up to 11.
The views over the waters of the Beauly Firth helped ease the intrusion of the drunken cacophony from two rows down and I tried to relaxed into the train ride.  As the train turned north heading for Dingwall there is not much to see as the track navigates its way through cuttings and skirts small towns and villages.  It is not until the rails cut back to the coast after Alness that the scenery starts to grab your attention again.  The Rigs in the yard at Invergordon are almost as impressive as the natural scenery as the train meanders along the shores of the Cromarty firth.  The seascape theme continues as the track runs between the shore and the Glenmorangie distillery at Tain.  The train then follows the tree-lined banks of inner Dornoch Firth, giving fleeting glimpses of the hills beyond.  After crossing the Kyle of Sutherland at Invershin, the views are once again hidden as the track makes it way up through forested cuttings before emerging at Lairg for the run down through Rogart to the shores of the North Sea at Golspie.  The train is then running almost on the shoreline all the way to Helmsdale.  The views out over the North Sea are accompanied by a broken sandy, pebbly and rock shoreline.  The trip is worth it for this stretch alone, it is amazing that a railway can run this close to the sea and the views reflect the harsh nature of the North Sea.  The track is also much closer to the shore than the road and consequently the views out over the sea are just a little bit better.   As the train climbs out of Helmsdale following the river of the same name away from the sea the scenery once again changes and you are confronted with the bleak, stark beauty of the Caithness and Southerland flow country.  Under the leaden sky the bleak expanse of the Flow Country all around the train is both foreboding and exhilarating in equal measure.  This bleak beauty continues until the train pulls in at Georgemas Junction and reverses direction for the final 10 minutes into Thurso.

My two hours in Thurso didn’t give me much time to explore the town.  I had a wander around the town and went down to the shore to have a look at Thurso beach and have a look at my Orkney through the mist.  I felt the town was a little bland and didn’t have much to offer on a dreich November afternoon, maybe not the best time to visit the north cost of Scotland!  I grabbed a quick sandwich and a pint in Caffe Cardosi and Top Joe’s respectively before heading back to the railway station and the ride back to Inverness in the dark, reflect on the train journey and scribble down these few words.

All in all it was a well worthwhile, if different, wee trip.  Being able to appreciate the scenery without having to worry about driving made it a relaxing trip for me and I have to admit I might let the train take the strain again in the future.
I hope I can still get dinner when I get back to Inverness tonight and the hotel grants me a good nights sleep!

Update:  If you are going north by train, LNER first class is superb and the service second to none!