Like everyone else in the country, our plans for touring in 2020 were decimated early in the year with the world wide realisation that COVID-19 would necessitate unprecedented changes to the freedom of movement between countries and even within countries themselves.

As we scrapped plans for a German, Austria and Italy two up tour I began to look for alternatives closer to home.

Wales was still high on my list, but trying to organise anything around the constantly changing rules on travel was becoming a nightmare.  We decided just to play it by ear and get out and about as best as we could.

As soon as the restrictions on travel were eased I wheeled the RT out of the garage, dusted off the cobwebs and headed for a day out in the Scottish borders.  The plan was to run down the fast and twisty Dalveen pass then head north and back over the Mennock pass through Wanlockhead and follow the A & B roads back home.  It all started out great, the Dalveen pass is always a winner in my book and the deceptively fast road that carves through the stunning Lowther hills always ends way too soon.  My high was soon a low though as I approached the turn off for the Mennock pass and the road closed signs brought proceedings to a halt.  I headed for Sanquhar to get fuel and have a look at Google Maps.  Crawfordjohn looks like it might be an interesting wee diversion.  Ha! was I right or what.  The road starts off looking decidedly unpromising, narrow and lined with muddy ditches and farm detritus.  Give it a mile or two and it opens up as the road follows the sinuous burn that flows along the bottom of the shallow valley.

The run back home is over the Lanark hills and through the Levenseat / Tormywheel wind farm, how can the scenery change so much in half an hour?

Desperate for a night away a few weeks later we booked a night in Gretna.

We trundled down the west coast, picking up the A77 after passing Trumps big white hoose at Turnburry.  The A77 is one of those roads that really should be rubbish and only for getting to the Ferry terminals, but I actually quite like it as it hugs the rocky shore with the sea on your right and Ailsa Craig off in the distance. 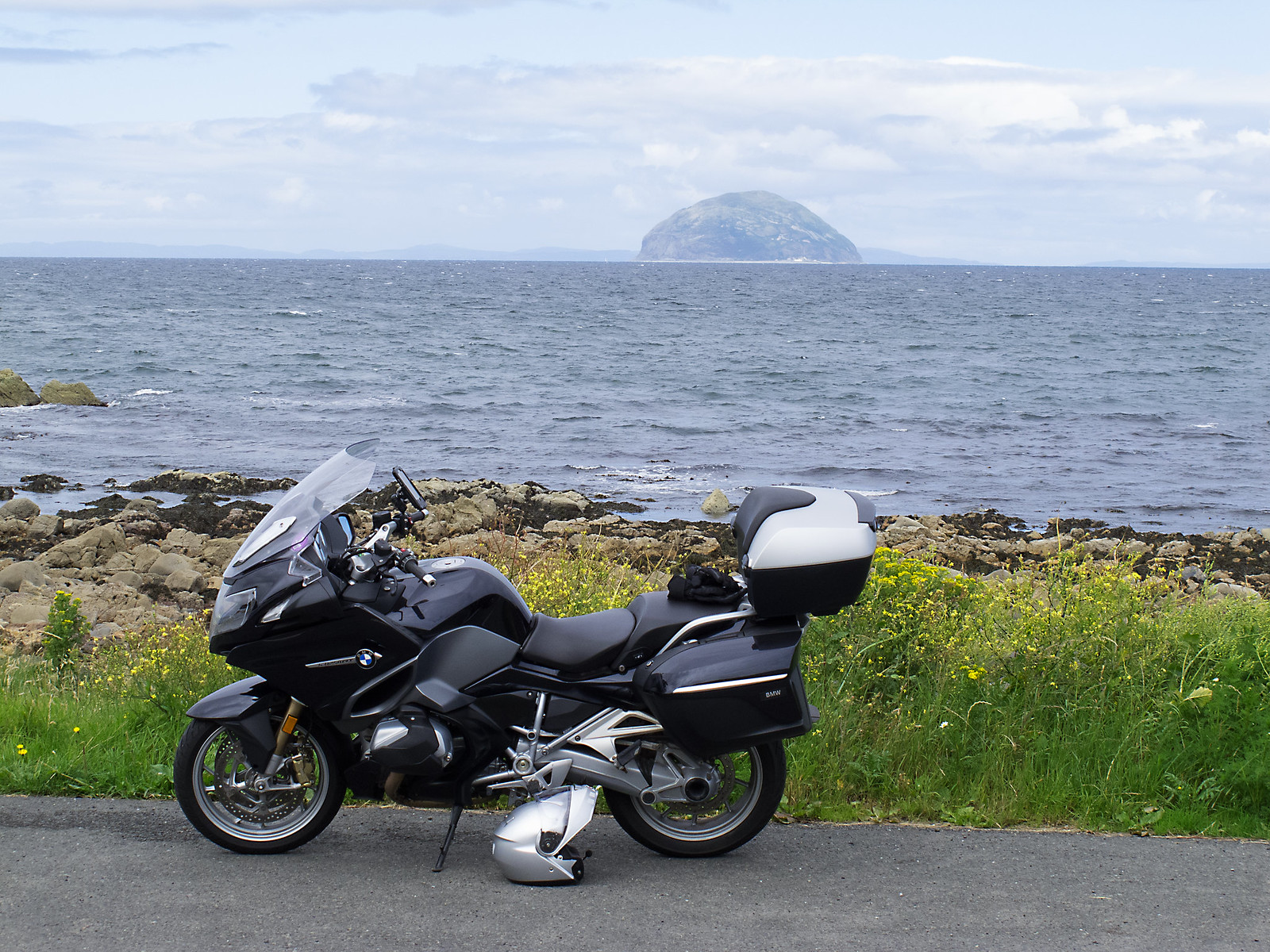 After a quick coffee and cake stop at the excellent Dnisi in Stranraer we headed back inland making progress along the wide open A75 for Newton Stewart.  Jumping off the main roads we swept through the bottom of the Galloway Forest Park.  As the trees closed in around us the scenery became decidedly more rugged with hills rising steeply on both sides of the now twisting and turning road.  All of a sudden the Clatteringshaws dam rises up in front of us as we climbed up to the loch of the same name.

After leaving Clatteringshaws I just set the sat nav to get us to the digs, I have come to the conclusion that there is hardly a bad road to be had down here!  Two hours later we were booked in relaxing with beer and wine in the Hunters Lodge hotel.

Sunday morning dawned grey and misty, but at least it was dry and the forecast looked good as well.  Over breakfast Audrey decided that she wanted to go north up the Dalveen pass, that suited me as I was keen to get back on the Mennock pass as well since I had missed it the previous month.  After breakfast the sun had come out and we headed north for Dumfries and then onto the A76 to pick up the Dalveen pass at Carronbridge.  It was OK, as usual!

At Elvanfoot we headed straight for Abington and down the Mennock pass through Wanlockhead.

I must have taken a wrong turn somewhere as we ended up in Lanark when I though we were heading for East Kilbride.  Never mind, it is all good!  After a quick stop for a coffee it was the usual bleak roads home.

September saw me in Wales on my own hunting down roads and sights for, hopefully, a longer two up trip next year.  You can find the full Wales story here.

So that was really it for 2020, apart from a few days out.  At least we got out and about and managed to get in a lot more miles and sights that a lot of people.  The tribe has been healthy up to now, so for that I must count myself lucky.

Who knows what 2021 will bring, will we be able to tour again as in years pre COVID?  Like I said I have been lucky so far, but the dark clouds of redundancy are gathering on the horizon, so who knows what the new year will bring.

Thanks for reading, stay safe and enjoy every mile!