As north as possibe, a Euro warm-up

With a 2500 mile Euro tour planned in August, Audrey decided that we (she) should get a wee warm up tour in first.  A good idea since she has never been on the bike for more than 3 days in a row and only covering about 250 miles in those 3 days.  Audrey had wanted to try out Sleeperzzz as I have stayed there a few times and she liked the look of it.  The carriages were all booked out, but they did have the old waiting room available, so we booked up for two nights in the station building.  A quick search found us a hotel in Newtonmore for the first night that accepted the vouchers we had for a free stay.
Just for a change the rain was lashing down when we left home.  We decided to head for Fort William going up through Glencoe.  The ride was a bit of a chore with the constant rain and cold winds so we pulled into the Green Welly, a mandatory stop on this road, to grab a coffee and warm up.
After drip drying for half and hour over a coffee and a steak roll, we headed back into the rain.  By this time the rain had teamed with with low cloud and mist as we climbed over Rannoch Moor to make Glencoe instantly forgettable, on this occasion.  Stopping at Fort William in the unrelenting rain we decided not to hang around and press on for Newtonmore and our first stop.
As we sat down to a set menu, warm beer and wine surrounded by bus loads of tourists we realised why it was so cheap!  Still the food was OK...

Friday brought blue skies, at last!  After breakfast we headed over to the A9 to get up to Inverness before heading for Ullapool.  Once past Inverness on the A835 we stopped at Rogie Falls for a look. 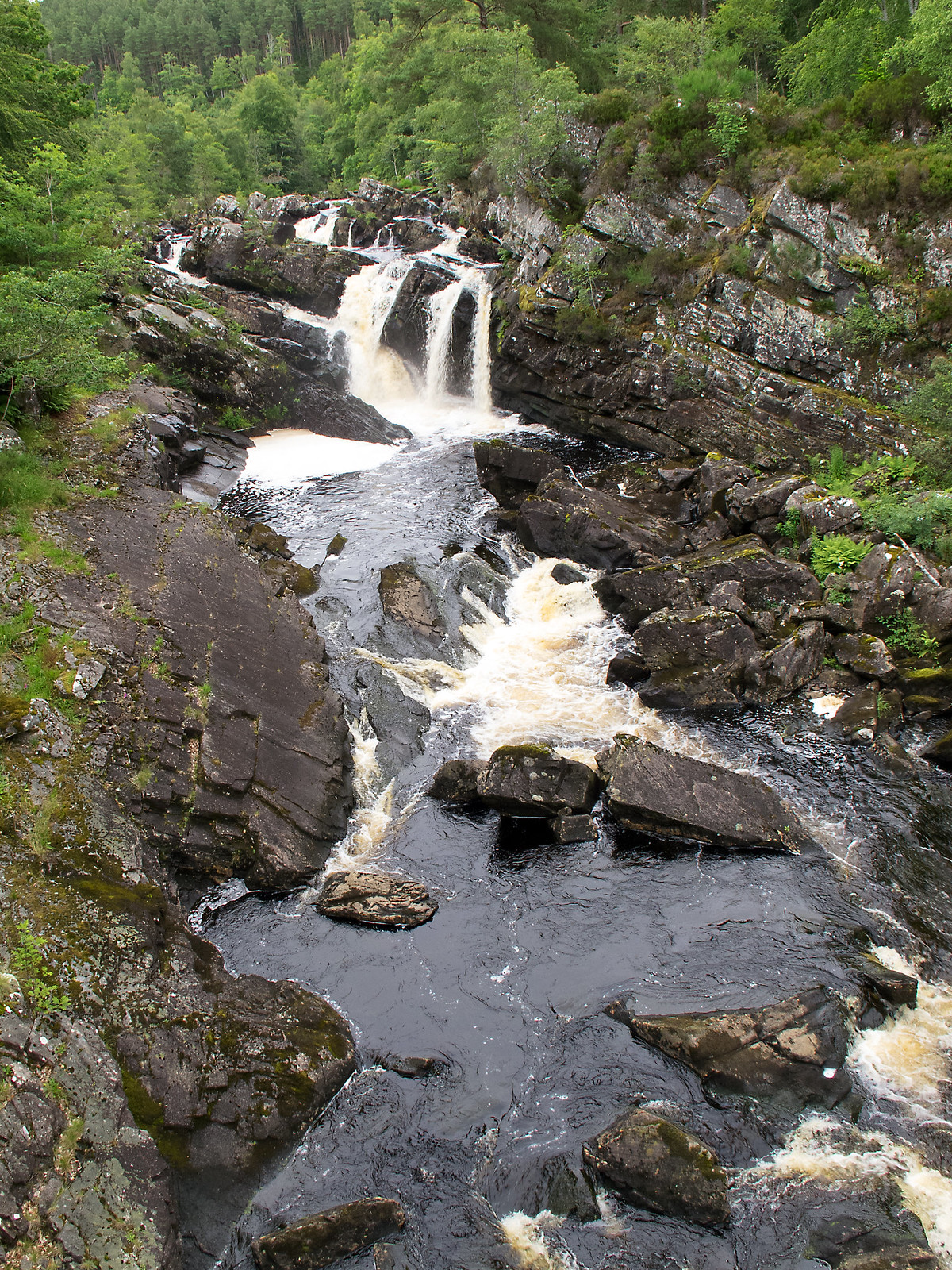 The sky was still blue as we left Rogie Falls and continued towards Ullapool.  After passing through Garve and Gorstan the A835 becomes a fast inviting road that urges you to press on, even two up on a loaded bike.  It is one of my favourite roads on the RT, it suits the RT down to the ground.  The road surface is smooth and grippy and the bend are fast and flowing with few few surprises to catch you out as you take in the scenery, especially over Loch Glascarnoch to the hills beyond.  Loch Broom appearing on the left means that Ullapool and lunch are close and soon enough we are parked up in Ullapool outside The Frigate and ready for lunch.

After a very filling Cullen Skink and a wander around Ullapool to try and settle lunch we fuelled up the bike and headed north.  No sooner are you out of Ullapool and you are at Ardmair and it's pebble beach.

As we left Ardmair the rain began to drizzle again and the further north we went the worse it got.  A few more snaps were in order before the rain came on for real. 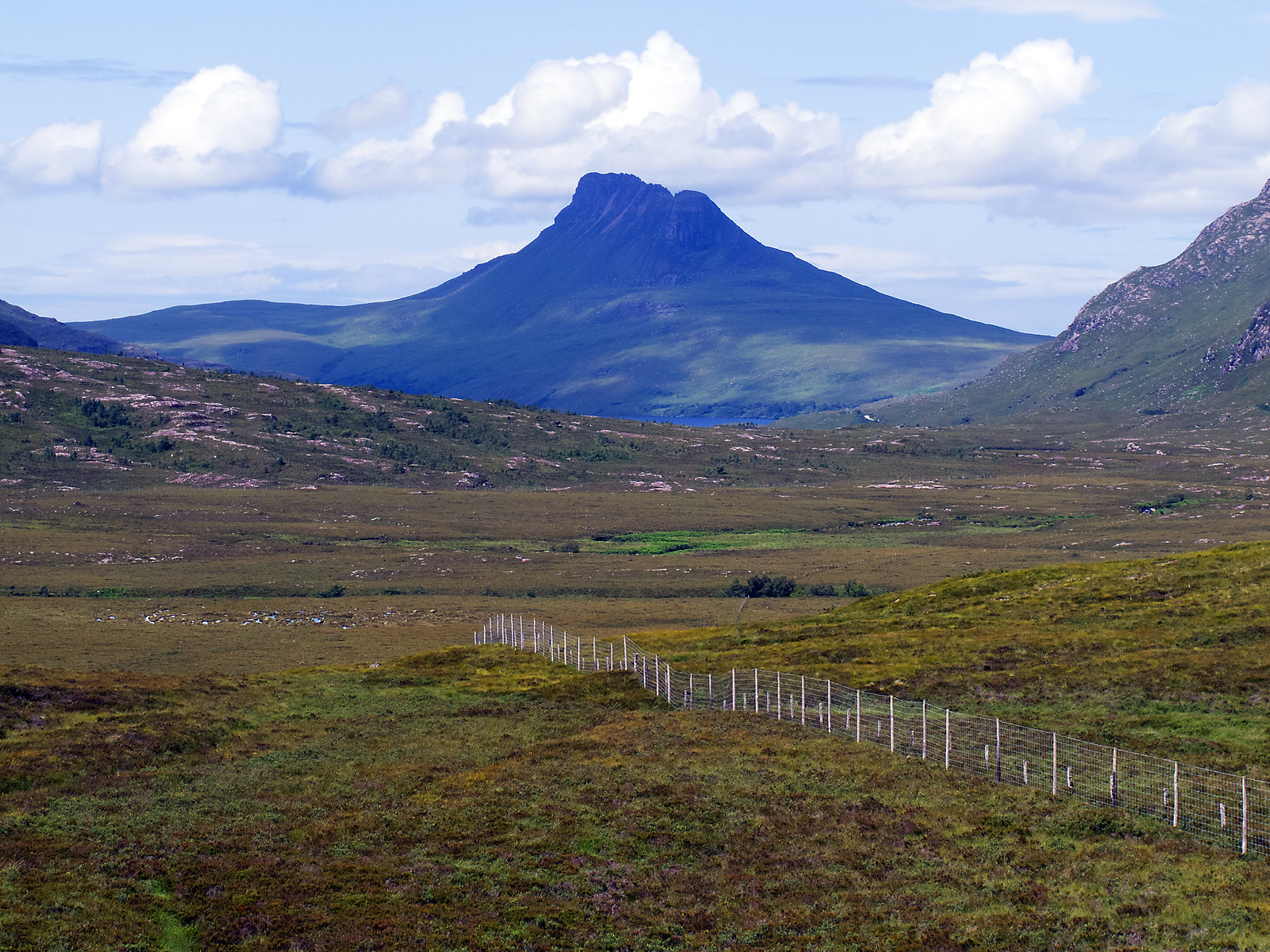 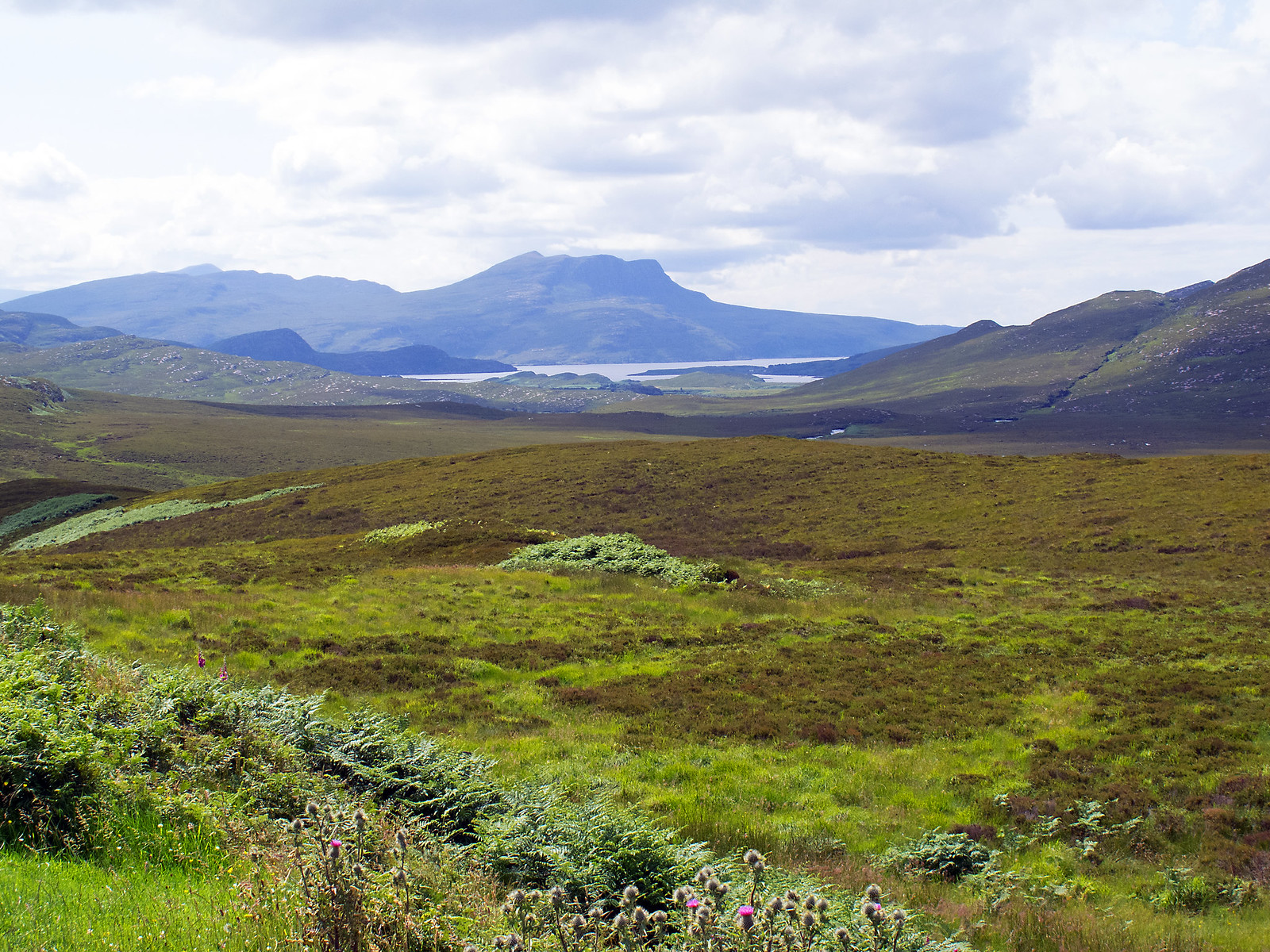 The rain was now back on for real so we decided to head to Sleeperzzz as quickly as we could.  At Ledmore we picked up the A837 and headed for Lairg.  The rain rain slowly eased off again and by the time we were on the banks of Loch Borralan the roads were dry.  The A837 is a great wee single track road, the surface is fine and it is easy to see well ahead making it an unusually fast single track road.  Lairg came and went and we arrived at Rogart just in time to get some supplies before the local Spar closed then nipped over to the Pittentrail Inn for dinner and a couple of drinks.

Remarkably, Saturday was dry!  We set out for Tongue again along some stunning single track roads.  We headed up past Altnaharra first on the A836 from Lairg, I knew this road was good as I had rode it when I visited Altnaharra last year.  After passing Altnaharra it started to get a wee bit cloudy, but at least it stayed dry.

Pressing on north, the clouds enveloped up a few times and progress became slow on the sinuous single track road, but as we dropped down into Tongue we also dropped down out of the clouds and the views of the scenery returned to normal.

Audrey decided that she wanted to go to Dunnet Head, the most northerly point on the British mainland.  We retraced our route back through Tongue and headed east on the A836.  Another photo opportunity came into view as we approached Bettyhill.

I like the road from Bettyhill to Thurso and lunch was calling so we set of for Thurso without intending to stop again.  A couple of comments from the back along the lines of 'are you forgetting I'm on the bike' reeled things in a bit!  Parking up in Thurso we headed into the town to find a cafe.

On the road to Dunnet Head from Thurso there is a beach I have passed a few times and always wanted to have a look at.  On the maps it is called Dunnet Beach.

Another 10 minutes on the bike and we were at Dunnet Head.  The wee single track road upto the lighthouse is crying out for some wild camping beside some of the wee lochans close to the twisting single track road.

After a wander around the harbour and leaving John O Groats the bike needed fuel and we needed more supplies for the digs, so we headed for Wick.  The bike got fuel and we got supplies and a coffee from Tesco.
I know I moan about the A9, but the stretch from Latheron down to Golspie is spectacular, both for the views and for the riding.  The hills around Berriedale then the fast and flowing curves that follow taking you to Helmsdale.  All this with the North Sea off to your left as the road dips and dives to and from the coast make for some great riding.  The ride back down to Sleeperzzz was great, Audrey was really getting into the swing of things and cornering before me!
We were both done when we got back so we whipped up a pasta dinner in the digs and just chilled out at Sleeperzzz with wine and beer.

On Sunday we were planning to ride home down through Braemar and Glenshee but the weather had taken a turn for the worse and the rain was back.  The forecast for the Glenshee area was biblical, so the decision was made to endure the A9 and just get home.  It was a wise choice, we hit some rain, but over to our left over the Cairngorms the rain was sheeting down and the sky as dark as I have ever seen.  We had a quick stop at Ralia for coffee, but that was the highlight of the run home.